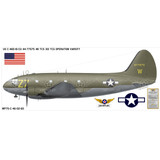 The Curtiss C-46 Commando is a twin-engine transport aircraft derived from the Curtiss CW-20 pressurised high-altitude airliner design. Early press reports used the name 'Condor III' but the Commando name was in use by early 1942 in company publicity. It was used as a military transport during World War II by the United States Army Air Forces and also the U.S. Navy/Marine Corps, which used the designation R5C. The C-46 served in a similar role to its Douglas-built counterpart, the C-47 Skytrain, but it was not as extensively produced as the latter.

Spruce up your room, man-cave, garage or toolbox with this vinyl decal paying tribute to the 99th Fighter Squadron and the Tuskegee Airmen! Comes with smaller vinyl decals that can be applied anywhere, an application tool, and instructions.