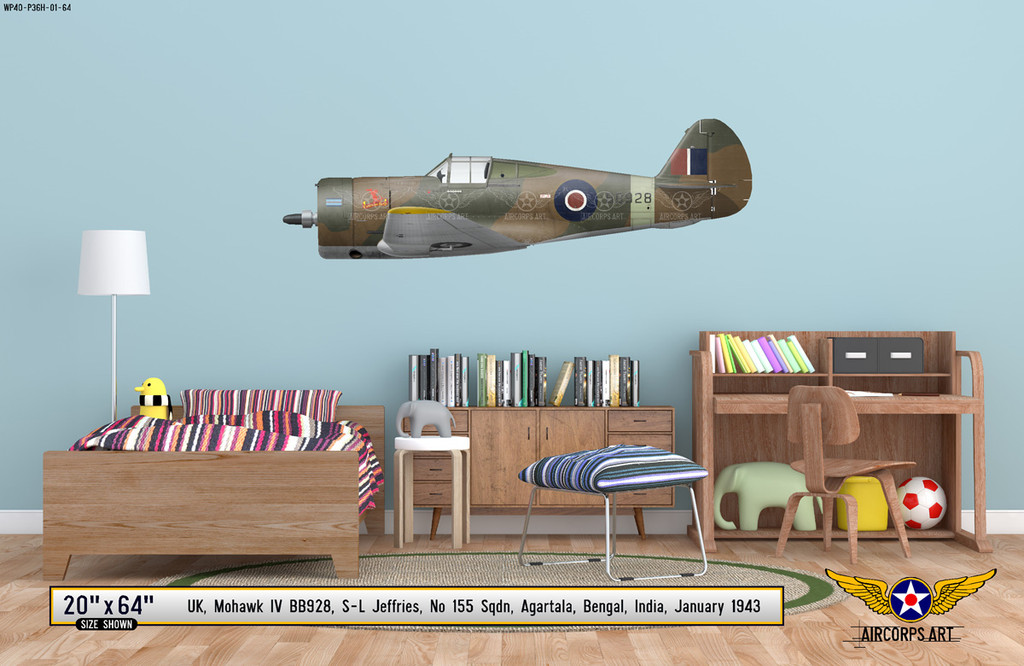 Mohawk BB928 was the personal aircraft of Sqn Ldr 'Porky' Jefferies DFC of No 155 Sqn in January 1943. Like other squadron aircraft, it has personal nose art - in this case a fire-breathing Welsh dragon above the inscription Cymru am Byth. What makes this aircraft unique is that it is the only Mohawk known to have carried a 'scoreboard'. Jefferies had claims against both the Luftwaffe and Regia Aeronautica, and appears to have recorded both his confirmed and probable claims. His sole Japanese claim, variously noted as confirmed and probable, is also recorded. He was the only ace to make an air-to-air claim with the Mohawk

The Curtiss P-36 Hawk, also known as the Curtiss Hawk Model 75, was an American-designed and built fighter aircraft of the 1930s and 40s. A contemporary of both the Hawker Hurricane and Messerschmitt Bf 109, it was one of the first of a new generation of combat aircraft—a sleek monoplane design making extensive use of metal in its construction and powered by a powerful radial engine. Perhaps best known as the predecessor of the Curtiss P-40 Warhawk, the P-36 saw little combat with the United States Army Air Forces during World War II. It was nevertheless the fighter used most extensively and successfully by the French Armee de l'air during the Battle of France. From mid-1940, some P-36s en route for France and the Netherlands were diverted to Allied air forces in other parts of the world. The Hawks ordered by the Netherlands were diverted to the Dutch East Indies and later saw action against Japanese forces. French orders were taken up by British Commonwealth air forces, and saw combat with both the South African Air Force (SAAF) against Italian forces in East Africa, and with the RAF over Burma. Within the Commonwealth, the type was usually referred to as the Curtiss Mohawk.

Spruce up your room, man-cave, garage or toolbox with this vinyl decal paying tribute to the Mohawk! Comes with smaller vinyl decals that can be applied anywhere, an application tool, and instructions.