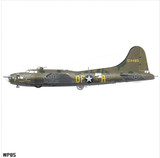 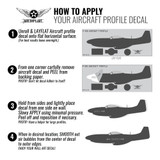 The Boeing B-17 Flying Fortress is a four-engined heavy bomber developed in the 1930s for the United States Army Air Corps. The B-17 was primarily employed by the USAAF in the daylight strategic bombing campaign of World War II against German industrial and military targets.

The famous Memphis Belle nose art is a representation of the George Petty “pin-up” illustration in the April 1941 edition of Esquire magazine.  Originally painted in the US, the Memphis Belle’s nose art was touched up and later repainted by Cpl Tony Starcer at Bassingbourn, England.  Starcer became well-known for his artistic talent, and he painted nose art on several 91st Bomb Group aircraft and aircrew flight jackets. The aircraft was then flown back to the United States on 8 June 1943, by a composite crew chosen by the Eighth Air Force from those who had flown combat aboard, led by Capt. Morgan, for a 31-city war bond tour. The Memphis Belle was named to honor Morgan’s fiancée Margaret Polk, of Memphis, Tennessee, whom he met before leaving for England.  Their love story was well-publicized, but their engagement ended during the war bond tour.  (Source: National Museum of the United States Air Force)

Spruce up your room, man-cave, garage or toolbox with this vinyl decal! Comes with smaller vinyl decals that can be applied anywhere.

$35.00
RAF B-17 Flying Fortress III No. 223 Squadron  No 100 Group RAF was a special duties group that was created to counter the Luftwaffe nightfighter force, which was wreaking havoc on the RAF...