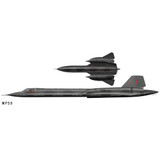 The Lockheed SR-71 "Blackbird" is a long-range, Mach 3+ strategic reconnaissance aircraft that was operated by the United States Air Force. It was developed as a black project from the Lockheed A-12 reconnaissance aircraft in the 1960s by Lockheed and its Skunk Works division. During aerial reconnaissance missions, the SR-71 operated at high speeds and altitudes to allow it to outrace threats. The shape of the SR-71 was based on the A-12 which was one of the first aircraft to be designed with a reduced radar cross-section. The Aircraft served with the U.S. Air Force from 1964 to 1998 and a total of 32 aircraft were built. The SR-71 has been given several nicknames, including "Blackbird" and "Habu."

Spruce up your room, man-cave, garage or toolbox with this vinyl decal paying tribute to the SR-71! Comes with smaller vinyl decals that can be applied anywhere.