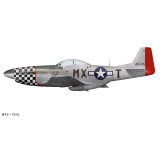 Frenesi was named after a popular song of the time, "Free 'n Easy". It was one the very first D-model Mustangs received by the 357th Fighter Group, and probably the only one operational on D-Day. The markings include 84 bomb marks, each indicating a completed mission rather than a bomb strike. There are two Japanese kill marks and nine German ones. The aircraft is painted Olive Drab over Medium Gray and has an unusual unpainted area containing aircraft information forward of the cockpit.

Need it to stick permanently? Also Available in Matte 3m Scotchcal for use on more permanent applications, such as trailers, sheet metal, and other smooth flat surfaces.