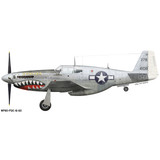 Built at Dallas, Texas, as c/n 111-28949[1] 44-10816 was allocated to First Lt. Oliver E. Strawbridge of the 26th FS, 51st FG, 14th AF, who named the aircraft 'Evalina' after his girlfriend. Subsequently allocated to First Lt. Sam McMillan, Evalina was hit by enemy gunfire and landed at the Japanese-held Suchin airfield in China, on 16 January 1945. The aircraft was rapidly seized by Japanese troops, Hinomarus were painted over the American stars but the rest of the aircraft was left in its original scheme.

Spruce up your room, man-cave, garage or toolbox with this vinyl decal paying tribute to the P-51 and the 354th Fighter Group! Comes with smaller vinyl decals that can be applied anywhere, an application tool, and instructions.