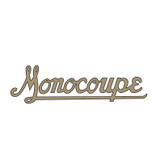 Monocoupe Aircraft is a type of small light airplanes produced in the late 1920s, and intermittently to the late 1990s. In the late 1920s, Monocoupes were famous for introducing relatively inexpensive, compact, affordable, convenient, sporty, speedy and efficient flying to the light plane market. In an era of large, expensive, open-cockpit biplanes, the Monocoupe was the first popular, compact, enclosed-cabin, two-seat, light plane in the United States. Light and clean, by comparison to other aircraft of the time, and affordable to own, the Monocoupe soon became popular for racing, and was soon one of the most successful brand of airplanes in America's popular air races of the 1920s and 1930s. Throughout the 1930s, and into the 1950s, the Monocoupes evolved through a series of increasingly powerful models, and remained popular.